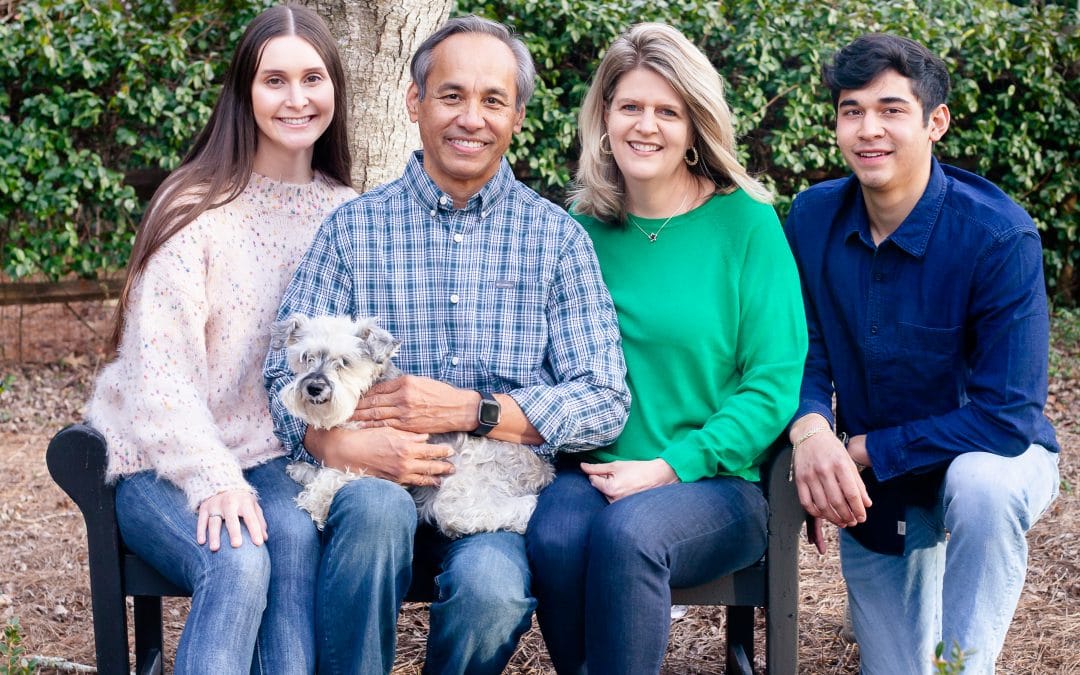 We are the Salas family. We consist of Jesse and Tracy and our two beautiful children Abbey
(21) and Alec (19). We also have a Miniature Schnauzer named Rosie.
We have lived in Montclair Subdivision in Snellville since 2004.

I was born and raised in Lagrange, Georgia. I graduated from the Medical College of Georgia
with a Bachelor of Science in Respiratory Therapy. I moved to Atlanta to work at Piedmont
Atlanta Hospital after graduation and I still work there today. I have worked as a staff
Respiratory Therapist in the Neonatal Intensive Care Unit and Adult Intensive Care Units as well
as the Pulmonary Lab. I presently work in the Pulmonary Rehabilitation Department working
with patients with various lung diseases.

As you can probably guess Jesse and I met at Piedmont Hospital. We worked together and
were friends and eventually began dating. We were happily married January 10, 1998 at
Callaway Gardens in Pine Mountain, Georgia. We moved to Snellville from Marietta because of
the great schools and community. Abbey started school at Brookwood Elementary and Alec
attended Cannon Church Preschool. We met so many people through volunteering at school
and church and in our neighborhood.

Jesse and I are adjusting to being “empty-nesters” this year. Abbey graduated from Brookwood
High School in 2018 and is a third year student at Georgia Tech. She is majoring in Biology with
a Minor in Business and Technology. She is the Vice President of the Campus Dance Group
and a Medical Intern at the Good Samaritan Clinic. Alec graduated from Brookwood High
School in 2020 and is attending Georgia Southern University. Alec has enjoyed working at
Dogwood Pizza for the past three years. He continues to work there during his breaks home
from school.

The community really came together for the graduating Seniors of Brookwood High School
during the pandemic. One event that we really enjoyed was the Senior Parade where the
Seniors were able to decorate their cars and drive around the surrounding neighborhoods. It
was very special and was all organized by parent volunteers.

One memorable event from the summer of 2019 was Alec and I helping a neighbor in need. We
heard a scream for help from across the street on a Saturday afternoon. We went across the
street to help our neighbor following a near drowning accident. We performed CPR and waited
for EMS to arrive. Alec’s lifeguard skills and my Respiratory background came into play.

We have thoroughly enjoyed living in this community and being involved in our neighborhood.
Jesse has served as the Website Manager for Montclair and is also involved in the Montclair
Men’s Club. The Men’s Club helps families in need, helps with neighborhood projects and also
enjoys social events together. I have served on the Montclair Welcoming Committee and the
Montclair Outreach Group. The Welcoming Committee welcomes new families to the
neighborhood and the Montclair Outreach Group helps families in need usually by dropping off a
meal or lending a helping hand. I have also enjoyed our neighborhood Women’s Bible Study in
the past.

Our neighborhood hosts several social events throughout the year which we enjoy. This year
our neighborhood has become creative and we have participated in Zoom Trivia Nights. To
everyone’s surprise we actually one one night. Our prize was a 12-pack of toilet paper. We also
looked forward to all the Food Truck Fridays this fall.

As a family we usually go to the beach in the summer with extended family. We enjoy the
beaches of the Gulf of Mexico usually in the Destin area. Hopefully we will be able to make
more travel plans in 2021.