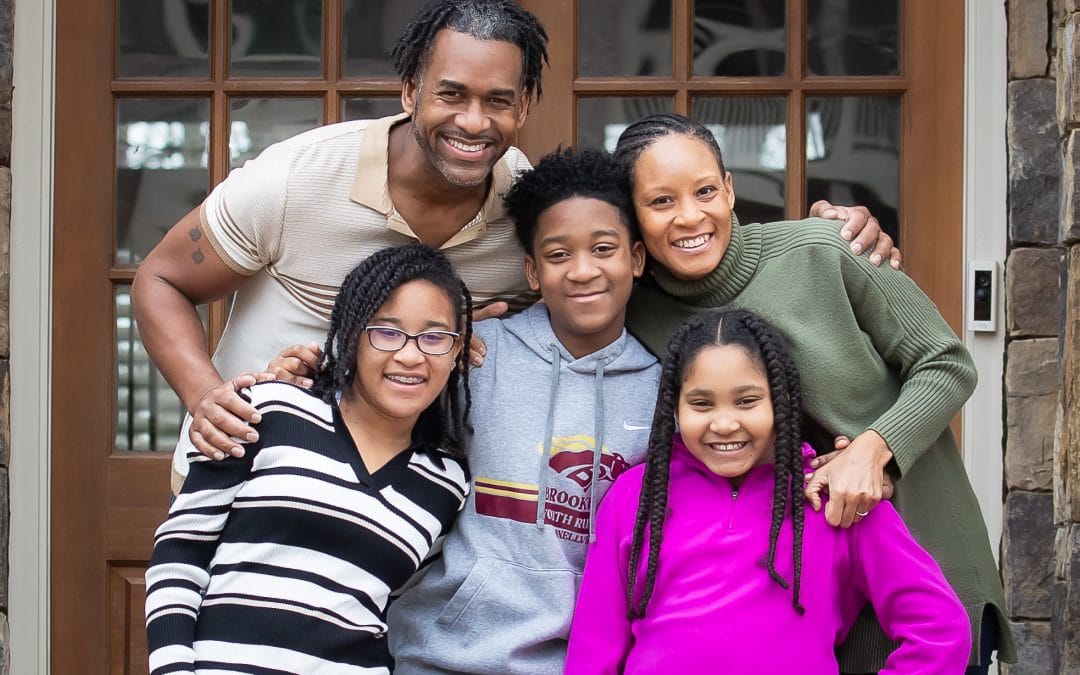 Andy and Tiencia first met at Duke University Hospital in 2002 when she was a medical student and he was a respiratory therapist. They were caring for the same patient when a special connection was made that set the foundation for a unique partnership woven together with love, endurance sports, and medicine. In 2004 they moved together to Georgia so that Tiencia could complete residency while Andy got his BS in nursing at Emory University. Tiencia and Andy were married soon after and both continued their professional training all the while growing their family to five. Tiencia is now a practicing emergency physician working at Piedmont Eastside Hospital and Andy is a nurse anesthetist who practices in outpatient surgical centers.

The James family first moved to Havenstone in 2008. They were drawn to the Brookwood cluster because they loved the great public school system and the strong sense of community. The James Family loves to live an active lifestyle that is full of adventure. They feel that setting big goals and not being afraid of failure is important to become the best version of yourself. This is a lesson that they try to teach their three kids by example in both their professional and personal lives. Tiencia is a competitive triathlete who qualified to compete in Kona, Hawaii in October of 2022 in the Ironman World Championships (2.4-mile swim, 112-mile bike, 26.2-mile run) after finishing in the top 10% at Ironman Tulsa in 2021.  This past December, Andy completed his first 50-mile race in Cloudland Canyon and is excited about doing his first 100mile race later this year. While none of their three children show an interest in ultra-endurance sports or medicine, for now, Tiencia and Andy enjoy watching Amor, Mason, and Sage grow into their own.

Amor is 15 years old and is currently a freshman at Brookwood High School. She has a sarcastic sense of humor and loves drawing, playing the cello, and musical theater. She completed her first season on the Brookwood HS cross-country team this year and is looking forward to Track and Field. Mason is 13 and is an eighth-grader at Crews Middle School. You can find him playing football on the front lawn or being chased off video games or the computer by his parents. This year he competed for the first time with the Brookwood Youth Cross Country Team as one of the top finishers and recently joined the YMCA swim team. Mason plays the trumpet and is looking forward to being able to join the Brookwood HS marching band next year. Sage is 9 years old and is currently a 4th grader at Craig Elementary School. Her hobbies include playing the cello, playing the piano, and swimming with the YMCA. In addition to the kids, their often-chaotic household is filled with furry and scaley creatures as well. They have one dog, three cats, a bearded dragon, two turtles, two fired bellied toads, and a betta fish.