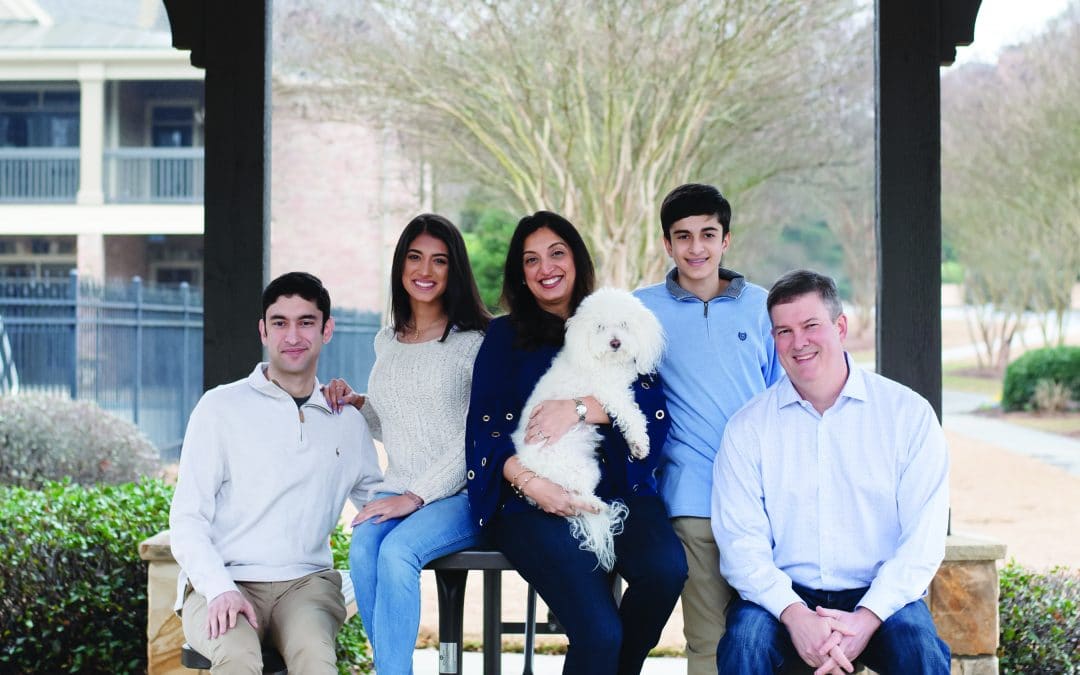 We are the Grose Family and we consist of Lee and Sanjna and our 3 beautiful children, Nathan (22), Rhea (17) and Dillon (14).  We also have a sweet bunny called Hopscotch and an adorable Bichon Frise dog named Newton.

We have lived in the Snellville community since 1999. Our kids have all attended Brookwood cluster schools. We first lived in Churchill Commons and then moved to Havenstone where we have lived since the last 8 years.

Lee was born and raised in Columbus, Ga. He first attended Auburn University where his dad and sister graduated from before he transferred to UGA. While at UGA, Lee roomed with Phil Nekro (son of the Atlanta Braves Hall of Fame pitcher) who happened to be from Snellville. In the spring of 1987, Lee and some friends stayed at Phil’s house after a Genesis concert at the Omni. At that time, Snellville had only one traffic light and one Kroger and Hwy 78 was just a 2 lane road. In 1998, when Lee came to interview for a job, Snellville had grown by leaps and bounds!

Sanjna was born in Kobe, Japan and lived there for 8 years. She went to an American school where they were forbidden to speak in Japanese so they could learn fluent English. From there, she and her family moved to Mumbai, India. Many summers were spent in Indonesia where her grandparents lived. After much persistence, Sanjna’s parents allowed her to attend boarding school in Bristol, England. From there, Sanjna went on to attend UGA. Despite us (Lee and Sanjna) being there at the same time, we did not know each other! It was not until we were both in medical school (American University of the Caribbean) that we met for the first time.

We started dating in London where we were both doing our clinical rotations. Our relationship continued in Los Angeles where we finished up our training in a University of Southern California hospital. At times we would be halfway across the world from each other and would communicate through handwritten letters. Phone calls were only once a week since they cost a dollar a minute! Despite differences in our cultures and backgrounds, we were happily married on June 1st and June 3rd of 1995. Our first wedding was a church wedding at St Luke UMC in Columbus Ga. Our second wedding was a traditional Indian wedding at the Peachtree Plaza in Atlanta.

Two weeks after our wedding, Lee started residency in Columbus Medical Center where he had been born. Lee finished residency in early 1999 whereupon he joined Snellville Medical Group as a board certified Family Practice physician. He worked there for more than 4 years and then became the medical director for Gwinnett County Detention Center and later Chief Medical Officer of Valley Healthcare. He currently works for Emory Snellville on Oak road where he is fortunate to work with Dr Yong Kim and Christina Goicochea. Here he gets to see and treat many people of the Brookwood community. Lee feels blessed to be working with a caring staff and has many wonderful patients.

Sanjna enjoys her family and has volunteered in her children’s schools in elementary, middle and high school as her children have grown.

Nathan was born in 1997 in Columbus Ga where Lee was a resident doctor at the time. Sanjna had a difficult pregnancy and she and Lee lived in the hospital for 3 mos where she was on strict bed rest. Nathan’s birth was a true miracle. We were surrounded by so much love and prayer before and after Nathan’s birth from Lee’s fellow residents and hospital staff. It was like a big family showing constant support. When we moved to Snellville in 1999, Nathan attended Snellville UMC preschool. From there he went to Gwin Oaks Elementary and Five Forks Middle, and then graduated from BHS in 2015. At BHS, Nathan made some strong friendships with whom he enjoys so many activities even today. From BHS, Nathan went on to GT where he studied Industrial Engineering and graduated with highest honors in December of 2019. During his summers at GT, Nathan interned at several fun locations like Boeing in Seattle and KPMG in NYC which gave us all an opportunity to enjoy some great visits. He is currently working for Tesla as a Global Supply Analyst in Palo Alto, California.

Rhea is a senior at BHS and has enjoyed being involved in numerous activities like cheerleading, cross country, golf and beta club to name a few. She is currently mulling over her future college choices. Her passions include gardening, environmental science and animal rights.

Dillon, like Rhea, was born in Snellville and attended Craig and is now in 8th grade at AC Crews Middle. He plays year round soccer for GSA and also plays tennis and runs cross country. He is on the Science Olympiad team at Crews and won State along with his partner in 6th and 7th grade. He also plays percussion in band at school. Dillon enjoys board games and playing computer games with his friends online. She will be graduating with honors and received the AP scholar award.

We have been active members of Cannon UMC since 1999. There we have enjoyed volunteering as Sunday School teachers, managing the Acolytes, helping with VBS, Prayer Bear ministry, Cancer ministry and Have a Heart for the Hungry. Rhea and Dillon both volunteered as acolytes and are currently on the multimedia team at Cannon. Rhea was a Girl Scout for several years and Nathan and Dillon were cub scouts where Lee was a den leader and assistant pack master when the boys were in different troops. Lee also assisted with coaching local youth sports teams. All 3 children did summer swim league with Cricket Commons Cyclones and were a part of the team for a total of 15 years.

We live in Havenstone where we enjoy many organized events for both adults and children. Some examples – the kids get snow cones on the first and last day of school and for adults we have a wine and snack event at the clubhouse once a month among many other activities.

As a family, we enjoy traveling to new places and exploring nature by going hiking. We also like to try new types of cuisine by attending local farmers markets and going to many of the culturally diverse restaurants Atlanta has to offer. Our family is also made up of huge sports fans who enjoy attending local sporting events and getting together with friends to watch some of the most significant events of the year such as the Super Bowl, the Masters and the Final Four. We also like to explore exciting new places in Snellville and the rest of Metro Atlanta. The Atlanta area has grown so much, and there are always new restaurants, bars, breweries and attractions opening for us to try.

The Brookwood community has been a great environment for our kids to grow up in with excellent schools, fun football games and great theater productions. We are lucky to be surrounded by warm and supportive families and endless things around us to do and experience.