Cars of Brookwood – The Story of BLU-BIRD by Art Coates 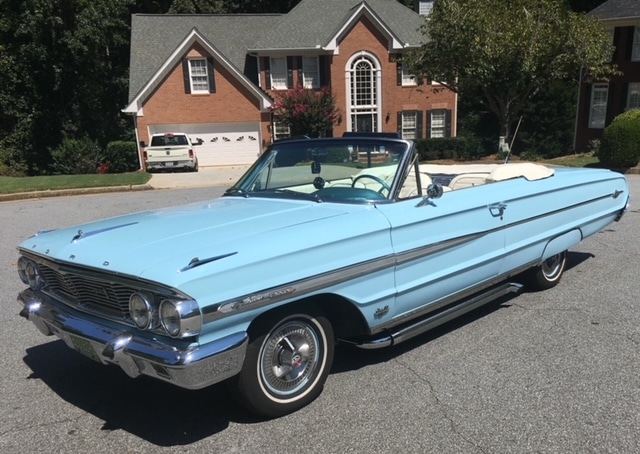 This is my very special car named BLU-BIRD. It is a 1964 Ford Galaxie 500XL Convertible. BLU-BIRD is special because it is about 98% all original. Over the years BLU-BIRD has had a few paint touch-ups, otherwise, it’s the same car that was born in 1964.

I came to own this car by coincidence. In 1967 I bought a ’63 Galaxie 500XL Convertible which was almost identical to BLU-BIRD. It was a great ‘baby blue’ car, but it wasn’t as nice as BLU-BIRD in several ways. The upholstery was different, no power windows and overall few of the special options shown below. It had a 352ci engine and a 2bbl carb. I got married in 1968 and we drove that car to Michigan where I was stationed in the Air Force. Not long after, we traded it in for a new 1968 Ford Torino Fastback. Wish I also had that car now!

So how did I get to own this car? Over the years I would look at similar cars on eBay, never intending to actually buy one. Then one night we ordered Chinese for dinner. My fortune cookie said THERE WILL BE A 4 WHEEL INVESTMENT IN YOUR LIFE. So I went to eBay and found this amazing car with only 67,500 original miles on it being offered on consignment by a classic car dealer in Phoenix. After a little negotiation it became mine. True story.

As an all-original car, BLU-BIRD is a perfect DNA time capsule, having had only normal restorative work to maintain its original beauty. BLU-BIRD is powered by a 390ci engine with a 4bbl carburetor and a C4 automatic transmission. The interior is original and shows it’s age just a little bit. Me too. I like it that way. We’re a good fit.

BLU-BIRD has many special options which were available in 1964, as follows:

In the early 60s the Ford Galaxie line dominated the car world. The 1964 Galaxie received two important recognitions. It was the Motor Trend Car of the year and also the NASCAR Grand National Champion. I get a lot of attention with this car and I often win awards. I have received two Best in Show awards. Needless to say, I’m very proud to own BLU-BIRD.