Amanda Bingham on the CMS Band 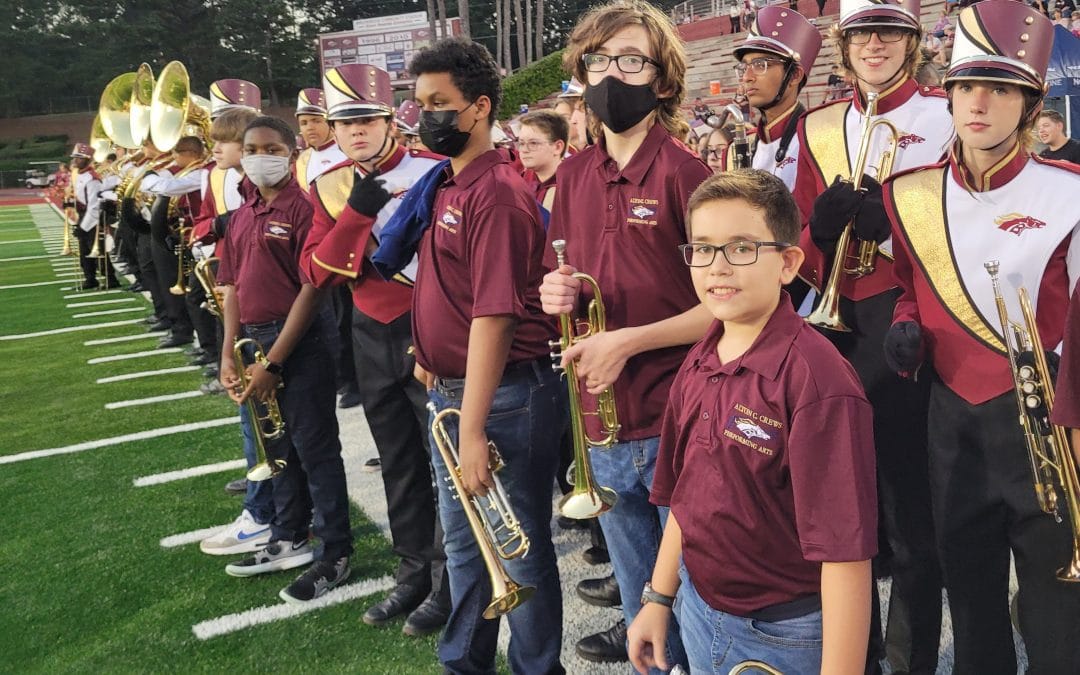 The Crews Middle School Band currently has over 325 sixth, seventh, and eighth-grade students enrolled in the program.  The Band Program at Alton C. Crews Middle School has gained a statewide reputation for excellence in our first 25 years. The Concert Bands and Jazz Band have achieved superior and excellent ratings at District Performance Evaluations and the Concert Bands have performed for Magic Music Days at Walt Disney World and Universal Studios on many occasions. The Eighth Grade Band has also performed as part of the Music Educators Leadership Institute at Georgia State University for a Festival of Music by Pulitzer Prize-winning composer Michael Colgrass and the 17th and 21st Annual University of Georgia Middle School Festival. In 2012 the band program received the GMEA Exemplary Performance Award. Band students from Crews have received numerous honors including All-State Band membership (43), District Band membership (over 250), as well as invitations and scholarships to summer music camps. Graduates from the ACCMS bands move on to become members of the highly regarded and award-winning Brookwood High School Bronco Marching and Concert Bands. Band begins in the sixth grade. Students who are remotely interested in playing a musical instrument are encouraged to take this class. Students are then exposed to basic music notation and reading, as well as trying out on as many instruments as possible to find just the right one. Band is an academic/performance class with a spiral curriculum that begins in sixth grade and continues throughout high school. Seventh-grade bands are divided into two fully instrumented groups and continue building on the foundation established in beginning band. Eighth-grade bands are more performance-oriented while continuing to develop and refine basic musical concepts. Band students are given many opportunities for musical growth through small ensemble participation, District and All-State Band auditions, Percussion Ensemble, and a Jazz Band.

Mrs. Amanda Bingham is in her 17th year of teaching middle school band. She is in her 12th year at ACCMS. She previously was the band director at Radloff Middle School in Duluth. Mrs. Bingham, a proud graduate of Brookwood High School, received her Bachelor’s Degree in Music Education from Columbus State University where she graduated Summa Cum Laude as a member of the Honors Program. She received the Phi Beta Mu Outstanding Instrumental Music Education Award and was on the CSU Dean’s List and the National Dean’s List every semester while at Columbus State. Amanda also holds a Masters’s Degree in Music Education from The University of Georgia where she graduated with a 4.0 GPA. She has been recognized by Who’s Who Among Students in American Colleges and Universities and Who’s Who Among American Women. Mrs. Bingham is a member of the Georgia Music Educators Association, Music Educators National Conference, and The Professional Association of Georgia Educators. In 2011 she received the National Band Association Citation of Excellence. In addition to her band responsibilities, she also previously served as the Connections Department Chair and a member of the Curriculum Leadership Team for eight years.  In her spare time, she enjoys playing in various ice hockey leagues and spending time with her husband and two-year-old son.

Mr. Darvin McRoy is joining the Crews Band family this year and is starting his 21st year in education and first year at Alton C. Crews Middle School.  Prior to his appointment at Alton C. Crews Middle School, Mr. McRoy was the director of bands at Loganville Middle School.  He has also held teaching positions in Rockdale County, Houston County, and Thomasville City Schools.  McRoy earned a Bachelor of Music degree in Music Education from Valdosta State University and a Master of Music degree in Trumpet Performance from Brooklyn College CUNY Conservatory of Music.  Mr. McRoy has also had the honor of serving as a clinician for honor bands and school band clinics.  He has also facilitated trumpet master classes for beginners through high school level students throughout the state and was honored to be a trumpet tech for the United States Army All-American Marching Band in 2017.  In addition to his band responsibilities, Mr. McRoy currently serves on the Georgia Music Educators Association All State Committee.  When he is not teaching Mr. McRoy performs with the Tara Winds, DeKalb Symphony Orchestra, and Athens Symphony Orchestra.  He is a proud member of Phi Mu Alpha Sinfonia and Alpha Phi Alpha Fraternity, Inc.  In his spare time loves spending time with his lovely wife, Zandra, who is the director of bands at Cedar Shoals High School in Athens, GA.

The Crews Band aims to help students feel connected and part of a larger family or team.  Students in the Crews Band program work to develop skills in teamwork, work ethic, creative problem-solving, error detection, and responsibility while learning to play a musical instrument.